On August 24, 2001, the West Irondequit Board Of Education voted unanimously to eliminate the use of the name "Indians" as the IHS Mascot. Here's the history on that decision and the winning logo:

Will they be the Bayhawks? The Eagles? Iron Eagles?

The ultimate decision will fall to West Irondequoit Central School District residents. Beginning Nov. 1, they may cast a ballot in support of a name to replace the Irondequoit Indians moniker, which will be retired later this year.

The district's Board of Education voted Aug. 23 to retire the Indians name and logo after a request to do so by Superintendent Glenn Wachter and pleas from members of the Native American community.

Paper ballots for the vote will be available beginning Nov. 1 at all West Irondequoit schools and at the district's administration building at 270 Cooper Road.

Ballots must be returned to the Irondequoit High School student council, 260 Cooper Road, Irondequoit, NY 14617 no later than 7 p.m. Nov. 14.

Residents who do not vote by paper ballot will be able to vote in a voting booth from 4 to 7 p.m. Nov. 15 in the Connorton Gym at Irondequoit High School.

The winning team name is expected to be announced Nov. 20, following verification of the ballots.

Linda Quinlan/Messenger Post Staff
October 25, 2001 School and community members will vote on the new mascot. The new mascot for the West Irondequoit school district may take wing - four of the final five choices are based on birds. Next month, students, staff, alumni and residents will vote whether they want to be either the: Bayhawks, Eagles, Iron Eagles, Pride, or Raptors. The winner will be announced on or around Nov. 20, after a vote. A district Name Selection Committee provided the following reasoning for each of the finalists: Bayhawks: Hawks are majestic and common to this area. Combined with the reference to the nearby Irondequoit Bay, the name creates a unique image of a strong bird and a powerful competitor. Eagles: When combined with "Irondequoit," this name has good word flow and reflects national pride. Eagles are strong, grand, stately, and rare, and symbolize power, fortitude, and success. Iron Eagles: In addition to the "eagle" rationale, adding "Iron" from Irondequoit creates a double meaning with an image of a regal, soaring bird with one of great strength. It also provides good alliteration with "Irondequoit." Pride: This name represents a team, a unified pack such as a group of lions, who are known for their courage and fierceness. Pride also symbolizes spirit, esteem, and worth. Raptors: The name signifies all large birds of prey which can be found at the district's Helmer Nature Center, and implies keen-sightedness, strength, and surviving against incredible odds. The district's Board of Education voted to retire the "Indians" mascot last August, because some say it can be offensive to Native Americans. Last Friday, Oct. 19, a 16-member committee of residents, parents, students, staff, administrators and alumni deliberated for more than two hours to narrow the choices down from 25. The student council chose 25 - from hundreds suggested. The committee evaluated the choices based on three "guiding principles", set forth by Superintendent Glenn Wachter. The new mascot must: Theresa Werth, the district's director of public information, said the committee ultimately looked at the list of hundreds of suggestion because some of the top 25 didn't meet those standards. "I think the process had a lot of integrity," she said. Votes on the top five names will be accepted by mail starting Nov. 1. Students and staff will vote on the name Nov. 14 and 15. Ballots for residents and alumni will be available at all district schools and the administration building starting Nov. 1. Or, residents may vote at the IHS Connorton gym, 260 Cooper Road, between 4 and 7 p.m. on Thursday, Nov. 15. Members of the selection committee are: Two student Varsity Club representatives, Dan Juda and Pat Puccini; Arkee Allen, who coaches the freshman football team and Varsity wrestling team at IHS; three at-large student representatives, Keegan Brown, Carolyn Feinberg, and Christine Preddy; IHS principal Jeff Crane; student council advisor Nandy Bonavilla; student council officers Jamie Gentile, Matt Bovenzi, Francesca Magri, and Laura Reardon; director of athletics Dennis Fries; alumni association representative Bob Rehbach; PTA representative Brenda Campbell; and one at-large community member, John Becker. Werth is a non-voting member. ©Irondequoit Post 2001 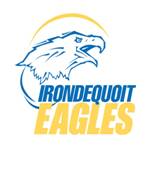